Welcome to the humble home of SkyMarshall Arts

So here you are. After some Googling I guess, because you found something I’ve made and now you’re curious? Yes, I am the one creating all that music you’ve heard – and why you landed here in the first place. So this site is simply a landing page to let you know about how and where to get my stuff and maybe some little extra tidbits about how it all came to be. Poke around and see. Join our Discord if you want to join and just talk.

SkyMarshall Arts – Walking in  the Air (feat. Anastasia) | Latest Release: August 27th. 2022
A remake of the theme to the 80’s animated movie ‘The Snowman’. Always liked the music in that and it makes me nostalgic, so I thought it would be a good idea to do a version of it. Anastasia did the vocals.

The latest and greatest. Had lots of fun with this. Great vocalists too. A collection of pure nostalgia for anyone sentient through the 80s and 90s.

A collection of some of my biggest hits out there on the internets, and most of the newest stuff. Vocals, movies and gaming are a theme in this one. 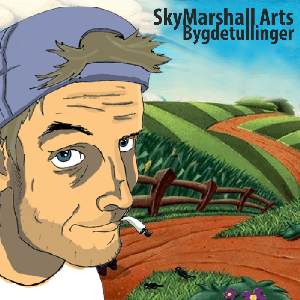 Pure norwegian funny garbage. Will make sense to absolutely nobody outside of our Viking homeland, but hugely popular among the norsemen.

My studio. The dungeon. My lair.

So this is where I create my music. The mancave. When we bought a house this was an important thing. I needed my dungeon. I’ve got everything I need here. A powerful rig, studio monitors, VR, midi-keyboards and ofcourse retro-computers like the Amiga 1200 and the Commodore 64 with it’s incredible SID-chip under that yellow 80’s plastic.

I use FLStudio Producer Edition for everything I do, I tinker live on a Novation LanchKey and I edit samples in Adobe Audition and vocals are recorded on a HyperX Quadcast. When I get bored I probably have more games than I will ever be able to complete in life-time as well as every console ever made ever and two beautiful arcade cabinets of Mortal Kombat and PacMan. Collecting games and retro-tech is a big hobby of mine.

When it comes to soundcard, I have used the Steinberg UR242 for years now. It works well and never tanks. I use a pair of M-Audio BX5 for studio-monitors, and Cerwin Verga surround system on a Sony STR-DH520 amplifier when I need to feel the thump. Other than that I dont use anything fancy or crazy expensive. Useful stuff that just works.

So that’s my little hobbit-hole. Join our Discord if you want to hang and talk more.

Eirik Hafskjold has his origins from the Amiga and PC tracker music scene in Norway as early as 1995. (aka DjDark, Dj Dark, SkyMarshall). Early works was produced and remixed in software such as FastTracker and Modplug Tracker and shared locally on LAN parties or online on popular tracker scene websites of the time.

The rise of the internet resulted in that a few select songs started to make the rounds with free sharing of mp3, remixes, internet forums and word of mouth online – and by 1999 the norwegian electronic band SkyMarshall Arts had its genesis. From there it has been a steady stream of electronic compositions in many genres released at an intermittent rate.

The common theme since the beginning on the Commodore Amiga has been gaming, and this has resulted in many a song based off arcane melodies long forgotten, which in return has resulted in a loyal likeminded fanbase. Unknown or confusing to many non-norwegians is the fact that he has produced many fairly popular norwegian songs of humorous nature as well.

All in all SkyMarshall Arts has been around for a while making music in many a genre and will continue to do so in the unforseeable future.

You can find us in our Discord

Find me on Playstation

Find me on Xbox Live

Some of my music videos